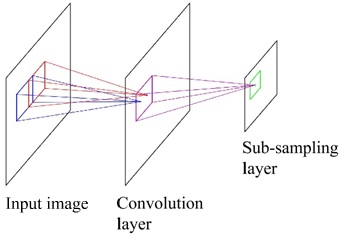 A convolutional neural network (CNN) is a special kind of neural networks that has been widely applied to a variety of pattern recognition problems, such as computer vision, speech recognition, etc. The CNN was first inspired by [Hubel & Wiesel 62] and continually implemented by many researchers. Some successful implementations of CNN are NeoCognitron [Fukushima 80], LeNet5 [Lecun & Bottou+ 98], HMAX [Serre & Wolf+ 07], AlexNet [Krizhevsky & Sutskever+ 12], GoogLeNet [Szegedy & Liu+ 15], ResNet [He & Zhang+ 15], etc.

In the feed forward neural network, the input is fully connected to the next hidden node for every neuron. In contrast, the input of CNN only makes the connection within a small region. Each neuron in a hidden layer will be connected to a small field of the previous layer, which is called a local receptive field. For example, if the field has a 3 × 3 area, a neuron of the first convolutional layer is corresponding to 9 pixels of the input layer. Figure 2 illustrates the small coloured box as the local receptive fields, and the coloured lines represent where the neuron is connected to.

In the convolutional layer, the neurons are organized into multiple parallel hidden layers, which so-called feature maps. Each neuron in a feature map is connected to a local receptive field. For every feature map, all neurons share the same weight parameter that is known as filter or kernel. For instance, Figure 3 describes when an input of 32 × 32 pixels is trained by a convolutional layer with filter 3 × 3 and 5 feature maps.