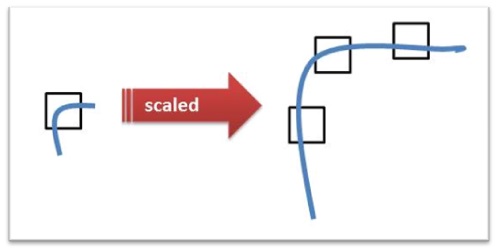 Features and interesting points are important information that can be extracted from an image to provide a “feature” description of an object in the image. This description can then be used to locate the object in another image which is usually called as image matching. Image matching is a fundamental aspect of many problems in computer vision, including object or scene recognition, solving for 3D structure from multiple images, and motion tracking. In order to achieve a good matching result, there are many considerations when extracting features and record them from an image.

Matching features across different images is a common problem in computer vision. When the images are similar in nature, which means they have same scales and same orientations, simple corner detector can be used to extract features from both images. However, when the images are different both in scales and rotations, simple corner detector cannot solve the problem. Some corner detectors like Harris detector is rotation invariant, which means, we still can find the same corner even if the image is rotated. It is obvious because corners remain corners in rotated image. However, Harris is not scale invariant because a corner may not be a corner if the image is scaled. A corner in a small image within a small window may look flat when it is zoomed in the same window as illustrated on the picture below :

SIFT stands for Scale Invariant Feature Transform is a popular interest point descriptor which is widely used because of its scale and rotation invariant characteristics. SIFT was created by David Lowe from University British Columbia in 2004. The example of SIFT robustness against rotation and scale transformation is shown in the picture below :

In short, there are three goals which are expected to be achieved by using SIFT :

The Advantages of SIFT

Besides of its scale and rotation invariant features, SIFT also have several other advantages:

The details about SIFT algorithm will be explained in part 2.