ii. Pipe and Tee
To count words / characters / lines we use the command wc with its options –c to count characters, -w to count words and –l to count lines. To count the number of files in a directory we can do the following
Ls > temp : redirects output of ls to file temp
Wc –l < temp : use temp as an input for the command wc –l
Rm –f temp : here the rm (remove) with the flag –f (without prompt) will delete the file temp.

The method above could work, but problems may still occur, such as:
– What if there is a folder named temp in the directory?
– What if 2 users run commands that use temp in the same folder at the same
time?
– The program may count “temp”, making the output 1 number more
To solve the problems the method above has, we use pipe “|”. By using it we can directly “feed” the next command the output of the first command
Ls | wc –l
The solution above shows the function of counting files in the directory without using a temp file. 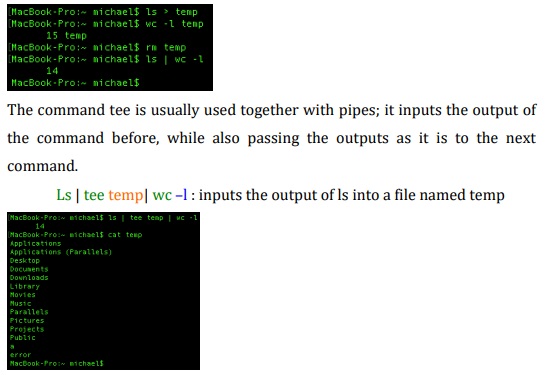 iii. Xargs and “
Sometimes using pipe just won’t do. Assume we have 3 files in a directory, namely a.txt, b.txt, and c.txt, and we wanted to count the number of lines in each file whose names ends with .txt. 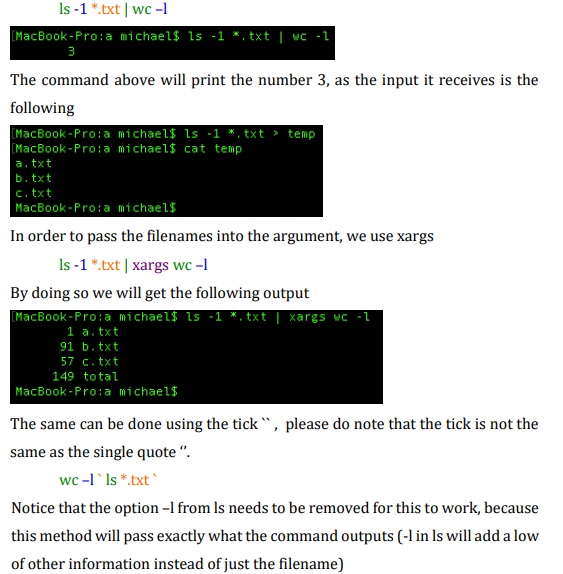 5. Wildcard Pattern
Notice the use of * in the previous example (wc –l ` ls *.txt `), it is a standard wildcard. Wildcard patterns consists of the following :

(1) ? represents any 1 character
(2) * represents any number of characters (including 0)
(3) [] specifies a range or option
a. M[a,e,i,o,u]* will match anything that begins with Ma Me Mi Mo or Mu
b. M[a-z]* will match any words starting with M followed by any lower case alphabet
(4) \ is an escape character notice how we use it in an early example (CD File\name\ with\ space) to escape the space character.
(5) {} specifies an or statement, {*.txt,*.doc,*.png} will match any words ending with .txt .doc or .png
(6) [!] is the opposite of [], if we do M[!E]* , will match to any word starting with M and followed by any characters except E , i.e. the word Meta, Mom, Male will be accepted but not Meta and so on.

Note: as a computer science student I do use the terminal regularly but not on anexpert level, the methods mentioned above may not be the best and may contain some mistakes, but are the ones I use regularly and do their jobs well. I apologize if there exist errors in any form in the article above, and thanks for your time.