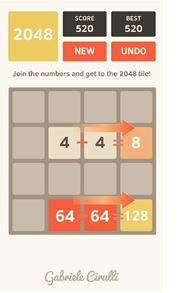 2048 is a sliding puzzle game first created by Gabriele Cirulli. In heart, it is a puzzle game with simple controls and simple to understand gameplay. In this game design technique, All the player needs to do is to combine blocks with the same number to get the sum of the two blocks. Only blocks with the same number that can be combined. By trying with the control (which is to swipe), we can already know how the game works. Its simple design makes it easy to learn although people will learn the hardship of having many different blocks. The new spawning block in a random open spot makes the player need to consider their own movements. It has a simple game rule that doesn’t directly means an easy game. Later on, the simple rule will give difficulty for the player.