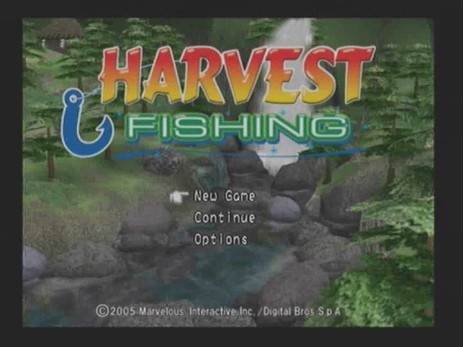 Harvest Fishing or as the original title show as River King – A Wonderful Journey was first released in Japan on January 2005 before entering Europe version on December of the same year and gets its US version in March 2006. Not really the same game as Harvest moon, as we can only do fish in the game, no farming at all. The difference is also that in this game we have goals to reach and to discover new areas.

The story was very good and getting better as we proceed. First, it was all about talking to villagers to get a request and we can only get 1 quest to complete before getting another. There is also a triggering event, which sometimes we mistook it as a goal. So, we must check our diary to see if it’s an event, or a goal.

Second, we don’t get to farm at all. Just fish. We should know which bait to use for a certain fish. Some also need luck to get, like forest encounters and fishing competitions, where we might get random fishes that ate the same bait. Also, you don’t have to worry about anything that could wilt or your energy bar will drop low for using the fishing rod. It will only decrease when you fail to catch a fish, or when you swim.

Third, there is no time going on  you don’t have to go home to get a rest. Even when you’re back at home, there’s no bed to sleep on! There is an inn, and it is up to you when will you use the inn because there is no morning nor night. It is always bright. There are no days going, and if you don’t like to sleep in the inn.

Lastly, the game doesn’t end just like that. There are four playable characters; Bro, Sis, Mom, and Dad. Each of them has their own goals and endings (which still, the main goal is to catch the river king). Also, their starting status are all different. Every time we load the game, we get to choose which character are we playing as. Interesting, isn’t it?

Now let’s talk about the minus point of this game… let me see. I found it even it has a great storyline and not-so-bad graphics, it is quite boring sometimes. I mean yes, there are challenges to compete, but there is also when you wish you had a town portal scroll so you could teleport to somewhere you’ve got to be, because your walking-running speed is killing you. Money, is also a tricky thing to get since there is no farming and the fishes are a struggle since if you don’t do it right you’ll miss the fish and once you get the fish, it doesn’t sell for a high price. Meanwhile, the recipes and poles and everything else on the shop is quite a price and as for saving, we’re using a statue for saving spot. Which each area only had 1-2 statues.

We are going to play as either Bro, Father, Mother, or Sis.  Each has different goals to reach and get their ending. But all goals are related to catch the River king. Also, if you choose Mother, you’ll see that you get a better cooking skill than everyone else. Still won’t be able to win the cooking festival, though.

Money is a tricky thing to get. I mean, for every fish we catch, it will not surpass the price of 100G (or is there any?) and that is the only thing we can sell. No, we cannot sell foods we cook. We will start at 500G and everything seems very expensive in the beginning. Hard life, fishers. You fish and sell for a fish in the stream area for just about 9G – 14G and the things you need to progress costs >500G per object.

The View of Harvest Fishing