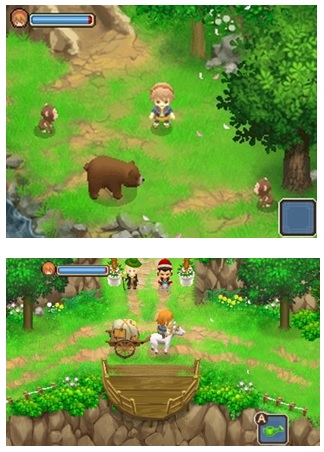 Harvest Moon: The Tale of Two Towns is a farming simulation video game developed by Marvelous Entertainment for the Nintendo DS as part of the Story of Seasons series. It is also the sixth Harvest Moon title to be released. The DS version is titled as Harvest Moon DS and the 3DS version is titled as Harvest Moon 3D. The original release date for the Japanese version was set to February 25, 2010 but was moved to July 8, 2010. New features in the game include new animals like Alpacas and Honey Bees and a Pickle Pot that can be used to make pickled turnips. It was released in North America on the Nintendo DS on September 20, 2011 and on the Nintendo 3DS on November 1, 2011 by Rising Star Games. The 3DS version was not released in Japan.

Hundreds of years ago, the towns of Bluebell and Konohana were friendly neighbors, joined together by a tunnel underneath the mountain that separated the towns.  The mayor of Bluebell began fighting with Konohana’s mayor as time went on. Each mayor claimed that their town was better, and it created more and more tension between the two towns. As the mayors continued to fight, the Harvest Goddess grew more and more restless.  When the fighting didn’t stop, the Harvest Goddess punished the two towns by blocking the tunnel that once connected them. Generations have passed, the town’s have very little interaction now, but still remain bitter to one another.   As a new farmer, you are eager to begin your new life on a new farm. While travelling on the mountain, you fall off of your carriage after nearly colliding with foxes, and you forget which town you were supposed to live in. Rutger, mayor of Bluebell, and Ina, mayor of Konohana, will each tell you a bit about their own, and it will then be up to you as the player to decide which town you like best. After picking a town, you will begin your new life there, and attempt to mend the relationship between the two towns.

The story started out when the players get to choose their preferred names and gender for the protagonist. The players will also have to choose where to reside, whether it be Bluebell or Konohana, although you can still travel between villages. The players can also move to the other village at the end of each season. If the players choose Bluebell, then they will get a bigger barn to tend animals such as cows, sheeps, alpacas, and chickens on separate barns. Although Bluebell focuses mainly on raising livestocks, the players can still get to plant flowers, grow crops, or plant trees even though the land for it is not as big as the one you’d get if you choose to reside in Konohana. The opposite is also true when you decide to live in Konohana, the players will only have one small barn, but will have a large land to grow a lot of crops, trees and flowers. The game’s main purpose is to win the cooking competitions that happen four days out of each season. This is when each town will come together and compete. By competing in each competition, it will slowly increase the friendship between the two mayors. By increasing their friendship, the Harvest Goddess will eventually decide to unblock the tunnel that is blocking the two villages. 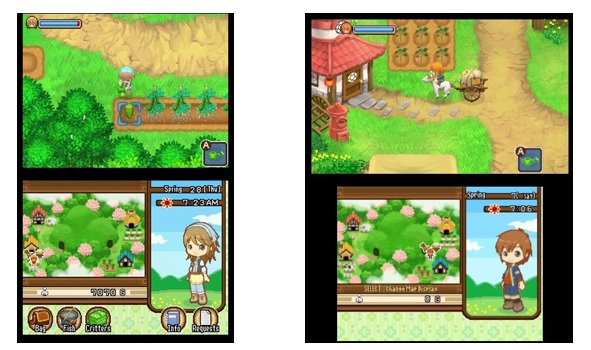 Like other Harvest Moon games, the players are able to get close to the opposite gender and marry them. In order to get close to them, the players will have to give them gifts, only one a day, and take them out on dates whenever they are available. In this game, certain bachelors are able to do reverse proposals as well. The players can tell how close they are to other person by looking at the chain of flowers, which is the friendship levels. For the bachelors or the bachelorettes, there are four stages in which the players can see before proposing to them, the purple flower, the blue flower, the green flower, the yellow flower, and the red flower. To be able to propose, there are certain requirements needed, which is having seen all of the flower events (except the red flower) with the bachelor or the bachelorettes, to get close to the people who are close to them, having your house upgraded to get the big bed, and to have them at a red flower. If the players upgrade their house again to get a new bed, they can have a child. The wife will be pregnant for two seasons before the baby is born. There are three stages of growth for the child before it stops growing forever. At each stages, the child will have their own likes and dislikes.

There are several festivals occur in each villages. They are mostly different even though some were the same, such as the cooking festival, the music festival, flower day, and the new years festival. Some are the festival that happens each month on each village’s specialty, in Bluebell it’s the spring, summer, and fall animal festival, while in Konohana it’s the spring, summer, and fall crop festival, in which the players would win if the affection for their animals is at max or if the crop the players’ harvested is at very high quality. There are also hand fishing contest in Bluebell while Konohana have bug catching contest and fishing contest.

At first, you will get the basic, Konohana outfit or the Bluebell outfit. The players will be able to unlock more outfits by getting closer to certain characters and get them some of the items they need to make the outfit. These outfits help raise affection for bachelors or bachelorettes, each of them having their own preferred outfits. Some of the outfits also have bonus benefits if you wear them throughout the day, and one of it only works if you wear it to bed.

The players can get quests by going to the message board of each villages. The villagers will often post quests for the players to take on and will have certain limit of time. The expansion of the players’ house, upgrading tools, and clearing the tunnels will also be taken from here, so be sure to look out for them. There are also requests in which you have to clear in a day, such as brushing the animals, milking the cows, harvesting the crops, and watering the crops. The villagers will then reward the players an item and a little bit of money, and will give you an extra reward if the player manages to do it in a short time. The game also have request levels, the more you accept and completed, the higher rank you will be. Some requests will not appear on the message board until the players have reached a specific request level.