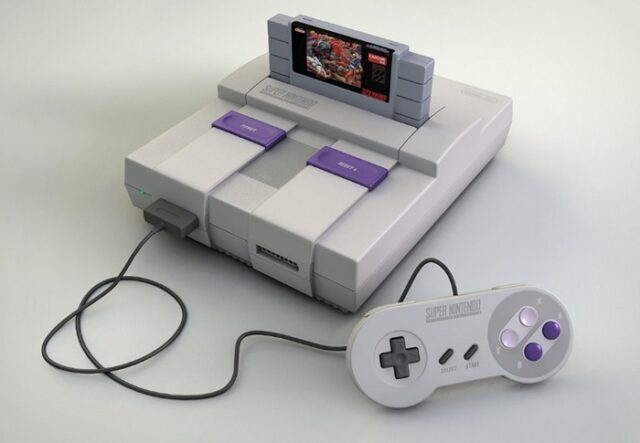 During the early 90s, Nintendo was in steady competition with other companies in the gaming industry (but their biggest competitor at the time was Sega). It was at the fourth generation of home video game consoles where the primary focus is primary focus is 16-bit. Nintendo released their next home console, the Super Nintendo Entertainment System; commonly known as the Super Nintendo or simply SNES.  Needless to say, the SNES was a huge success.

It’s already been 27 years since its official release and it has become popular among fans and retro gamers; even during the fifth generation. However, how does it hold up today? Is it still considered a classic console or outdated?

First off, the hardware is simple. In terms of appearance, the console is quite clean with its three-tone grey plastic with its logo embedded on it.

There are three buttons on the console. One is the power on/off. The second is the ‘Eject’ button, and the last being the ‘Reset.’ Pressing these switches is very simple but effective; even the Reset button makes restarting the console feel less of a chore in case the game doesn’t work.

As for the gamepads/controllers, you have your basic movement buttons, the pause button, the select button, and the ABXY buttons. There are also the L and R shoulder buttons, which makes the SNES’ gamepad the first to feature shoulder buttons. In hindsight, the controller is durable and comfortable to use, although the latter is subjective depending how big your hands are. The console offers two controller slots for two players so you can play some games with a friend.

However, the negative side of the console is that it’s not suitable for modern HDTVs. Unless you have an old TV, you’ll be spending hours trying to adjust the TV to make it work. Another negative side is that, unlike modern video game consoles, sometimes it takes too long to load a single game that you have to eject-insert many times or wait impatiently until it finally works.

In terms of visuals and sound design, the SNES is appealing to both aspects.

With the graphics, the SNES gives us a multitude of colors from the simple Super Mario World to Street Fighter II that’s very identical to its original arcade counterpart.

The graphics can also be colorful and animatedly detailed with some games, mostly the ones with story-heavy such as the RPGs Final Fantasy VI, Chrono Trigger, and Earthbound.

As for the sound, the SNES is virtually flawless. It’s capable of using guitar riff as heard from the first stage soundtrack from Castlevania: Rondo of Blood and near orchestrated music in Super Star Wars and Final Fantasy 6. Besides the music, the sound effects are also good as you can feel its impact from a character landing a hit on an enemy. The SNES can also use digitized voice. By today’s standards, it’s not as good as modern games’ voices, but during its time, it’s considered to be amazing.

The console can’t stand on its own without offering a library of games. The SNES has no problem with it as it offers a huge number of games. Even better, the games cross in many different genres. You have role playing games, fighting games, and the classic side-scrolling platform games.

However, the down side is that some games (especially the earlier SNES sports games) are prone to slow down and graphical hiccups, making it a lot harder and frustrating to play. Its processor cannot handle many objects on screen at once causing the game to lag terribly.

The games come in cartridges just like with most 16-bit video game consoles at the time. The cartridges are quite big, but easy to insert and draw on the SNES.

The question remains: does the SNES still hold up? Short answer is yes.

Sure, sometimes it’s frustrating if the console takes too long to load, but if you go into it with an open mind and patience, it can be fun and addicting. Nostalgia plays an important role with the console and any retro gamers.