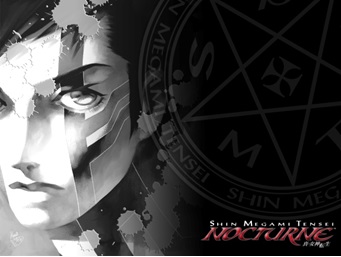 Shin Megami Tensei III: Nocturne is a post-apocalyptic role-playing video game for the PlayStation 2. It was developed by Atlus, published by Atlus in Japan and North America, and by Ghostlight in Europe. It is the third entry in the Shin Megami Tensei series, the central series in the Megami Tensei franchise. Multiple versions of the game have been published: the original version was published in Japan by Atlus in 2003, while a director’s cut was released in 2004 in Japan. The director’s cut was localized and released in North America and Europe in 2004 and 2005 respectively.

Nocturne follows the Protagonist, a high school student in modern-day Tokyo, as he is transformed into a half-demon after the world undergoes Conception, an apocalyptic event triggered by a sinister cult to trigger the world’s rebirth in a new form. With Tokyo transformed into a Vortex World filled with demons, the Protagonist becomes instrumental to the schemes of the Reasons, beings who seek to remake the world in their image, and Lucifer, the lord of demons. The plot’s ending branches depending on the Reason that the protagonists choose, it can be a law ending or a chaos ending, and the new route added that isn’t in the previous main Shin Megami Tensei games is a neutral ending. In Nocturne, the new alignment system allows the player to side with one of three Reasons or with other factions, or none at all.

Shin Megami Tensei III: Nocturne follows the previous Shin Megami Tensei games, having a press turn battle system. Whenever the attacks miss, the player loses 1 more turn and if the players struck the enemies’ weaknesses they gain half a turn. The game also have the demon negotiation system in which the players can communicate with the demons and receive item, money, or the demons joining the party when the player is on a high enough level as the demons

This is a new feature in the Shin Megami Tensei series in which after certain battles or boss battle, the players will earn magatama, in which the players can equip it and learn skills through them everytime they level up. Each magatama has different of skills and also affinities towards each elements. Be sure to switch everytime to gain advantage of the battles. Leveling particular Magatama can also affect demonic conversations with particular demon types. Magatama work in the following way: 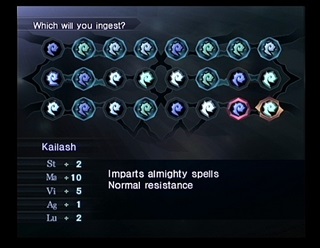 The players were originally just alone, and are required to recruit demons by having conversations with them. Demon negotiation is a unique system in which the speaker (usually, but not always, the Demi-fiend) tries to persuade an enemy demon to join their party. There are two restrictions on negotiation:

Demon negotiation, however, is radically altered when the “moon”, Kagutsuchi, is full, as it causes demons to be agitated and drunk with power. Demon conversation will always fail against bosses, any demons inhabiting the Labyrinth of Amala, and any demons fought in the Amala Network (though they will sometimes join of their own accord).

The players can also fuse up the demons into a new entirely different demon in the Cathedral of Shadows. The players also have access with the demons they recruited earlier in the game and recall them again in the players’ party.